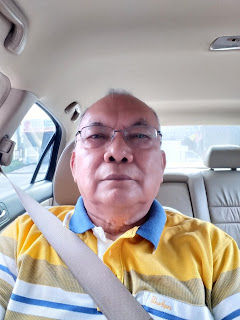 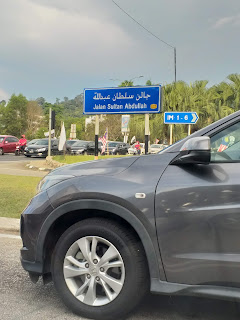 He who does not know who Sultan Abdullah is should be shot. 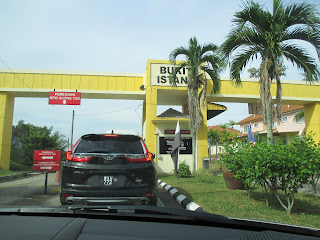 I was going to BUKIT ISTANA, not the ISTANA. 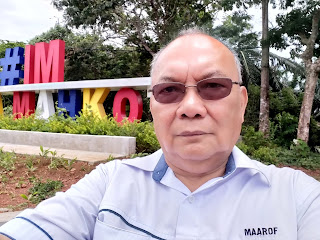 IM stands for Indera Mahkota
The last time I drove far was in 2014 before the great floods. I drove from home to Cameron Highlands to celebrate my first grandaughter's first birthday. After spending one night there, I drove to Pasir Puteh, Bachok and Kota Bahru, Kelantan to visit the places where I worked in 1972.
My wife was beside me then. This time, although she is not in the best of health, she could have followed me, but I had to leave her to be looked after by my daughters. My school mates were having reunions at Kelantan, Terengganu and Pahang. Because I could not leave my wife for too long, I decided to join them at Kuantan, Pahang on their last leg.
Two days ago, on the way there, I decided to drive through Kuala Pilah, Bandar Baru Serting and Muazam Shah. At Tanjong Ipoh, I decided to drive through Kuala Pilah town instead of turning left to Kg. Ampang Tinggi. There was a slight jam at Kuala Pilah town but I tolerated it anyway.
After leaving Kuala Pilah town I realised a white van with flashing blue lights fitted on its dashboard behind me was overtaking every vehicle, except mine. I knew that the flashing lights are illegal and the driver was fooling everyone, who gave way. He tried hard to overtake me, but I decided if he wanted to do that, he must play fair. There there was no way I could make him pass just because of the flashing blue lights.
Eventually, I had to give way to him as I was turning right towards Bandar Baru Serting. The driver displayed his displeasure by pointing a finger towards me. I had no time to check whether it was his middle finger or another. I only managed to see the name of a royal place written on his rear number plates. Well, royal vehicle or not, what is illegal is illegal. You can fool others by the flashing blue lights, but not this old man.
After that, my journey to Gambang, Pahang was smooth. I decided if anybody was to pass me, let him pass. But nothing similar occurred, although I had to make some dramatic overtakes. I also realised that, unlike my former Proton Waja which for a small change to a higher speed changed quickly to a lower gear, this Honda Accord did not. Many a time, I had to manually change to the third gear. I also realised that the third gear could go to 120 kmph with an RPM of 5,000. Don't do this again, Maarof.
The journey to Kuantan from Gambang was slow, with heavy traffic. Later, my friend from Kuantan told me, as I was going to Indera Mahkota, I should have proceeded towards the East Coast Highway at Gambang and exited at the Kuantan interchange. After all, I was not going to the heart of Kuantan.
I took a different route back home yesterday. At first, I decided to go to Temerloh via the East Coast Highway. From there I would proceed home through Jelebu, Negeri Sembilan. The journey through the East Coast Highway was smooth. What a pity, my car's Auto Cruise malfunctioned a few weeks ago.
At the last moment, I decided to exit at Kg. Awah, before Temerloh. The reason was to feel a stretch of Federal Route 2. Traffic was normal. Again after turning left at Temerloh, traffic was normal until I reached the border between the districts of Bentong, Pahang and Jelebu, Negeri Sembilan. It was nice to see the flags of Negeri Sembilan again.
After a brief stop at my kampung in Jelebu and meeting my sister, brother-in-law and cousin, I continued the last leg of my journey home.
Posted by maarofkassim at 10:47