I FEEL VINDICATED AT LAST AND LEAST. 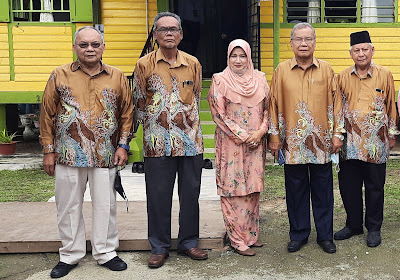 THE NEW OUTFIT
The story started about two years ago when my NGO's Committee decided that we need a new outfit. As the NGO's secretary, I was tasked to find suitable clothes for that purpose. Somehow the project was delayed because of the Covid-19 pandemic occurring not only in the country but the whole world.
When there was a lull in the pandemic, I managed to get the clothes. They were then cut equally and distributed to every member of the Committee during a meeting. But somehow a member of the Committee was absent and I gave his cloth to another member. Each recipient then had to bear the cost of tailoring his or her cloth to form a shirt.
A few months ago at a gathering where we were told to wear the new outfit, a Committee member was seen not wearing it. When questioned, the reply was he did not receive his share of cloth. The Committee member was the one who did not attend the earlier meeting when the clothes were distributed. Even the member to whom I gave his (the absent member) cloth denied receiving the cloth from me.
Not suspecting anything amiss, I had no choice but to look for new cloth for this particular member. Unfortunately, the cloth of the same pattern was out of stock. So I had to purchase another cloth with a different pattern for him. We all wore our new outfit for our recent annual general meeting with the odd member wearing one of a different pattern.
I thought all was forgotten except for the perception or suspicion on everyone's mind that I did not make the proper calculation when purchasing the new clothes. Suddenly a few days ago, out of the blue, the particular member who claimed to have not received the new cloth showed a photo of himself wearing a shirt of our new outfit in our WhatsApp group media.
Immediately I texted him asking why did he claim not to receive the new cloth when he is now actually wearing it? He replied he was not aware of this mix-up and apologised.  He even offered to pay for the new cloth. I told him just to forget it. Without prejudice, I realised that since he inadvertently showed a photo of himself wearing the new outfit, he meant no malice.

But at least I feel vindicated.
Posted by maarofkassim at 11:50