WHEN I ALMOST DID NOT MAKE IT! 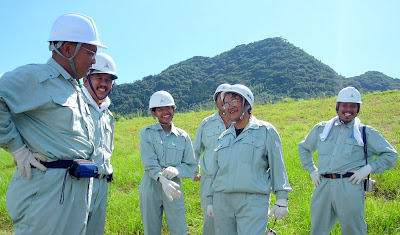 All smiles at Fukuoka, Japan, 2004.
Seeing the Japanese national football team's success at the 2022 FIFA World Cup tournament so far reminds me of staying in that country during the summer of 2004. I attended a training course in the city of Fukuoka in July and August of that year. But my going there was not plain sailing and I almost did not make it.
1. "Want to go to Japan?"
I was working outside my office when my boss called me on my mobile phone. He said if I want to go to Japan, do come back to the office then. I hastily returned to the office to find out what it was all about. It turned out that my boss had a discussion with our Seremban Municipal Council's President about the offer by the Japanese International Cooperation Agency or JICA in sending someone from the Council for a training course at Fukuoka, Kyushu, Japan.
The year before, someone junior to me in age but senior in rank had been sent there. So this time around the Council had no choice but to send me. But there was a catch in that the Council had to bear the flight cost from Malaysia to Japan and back. But this catch was missed by my boss. Had he seen it in the letter of offer, he might have told our President that nobody could go. This was because the Council had a ridiculous policy that no officer could go for any course, training, or seminar overseas if it involved the Council paying even a cent. Our President had just been seconded to the Council by the Federal Government and might not be aware of that stupid and regressive policy.
2. "Then you cannot go"

When I showed the photocopy of the letter pertaining to the flight requirements, my boss simply said "Then you cannot go". But when I showed him our President's instructions for sending me, he told me to try my luck and send my application as required by the Public Service Department in Putrajaya. That I duly did and my application was approved together with six others from all parts of Peninsular Malaysia.
3. No more seats

Then came another hurdle. The Federal Government wanted us to go to Japan together on one flight. When I checked the flight, the class which I was entitled to, the economy class was fully booked. Only the business class was available. All my other would be friends, except two, were facing the same situation. These particular two qualified for business class and had their flight confirmed. The other five, including me, had to seek approval from our departments for the flight class upgrade.
I always came early to work, so there was no problem with meeting my President for approval. The problem was, would he give it to me, knowing that he had already gone against the Council's policy in approving my flight expenses. So when approaching his office I was determined that if he said no, I was ready to pay for flight expenses to go to Japan because this was the chance of my lifetime to go to that great country.
When I met him I explained to him about my problem. Suddenly he asked whether the chief executive of the Council, the Secretary was around. I said yes because I saw him getting out of his car. The President asked me to call the Secretary to see him. Even though I knew that he could call the Secretary through the department's phone,  I duly walked to the Secretary's office just a few meters away. want
4. "I want him to go"

The Secretary asked what's my problem and I told him the same. When the Secretary came to the room, what transpired really gave me a pleasant surprise. The President told him "I have chosen En. Maarof to go to Japan. I want him to go there without any hindrance. Whatever the Council has to pay, we pay. Please arrange for his flight arrangements". I had nothing to say except to give my President a big 'Terima kasih Tuan".
Actually, only the flight to Japan was giving me problems initially. There were economy seats available on the flight home about six weeks later. But for some unknown reasons, the Council approved me the business class for that flight as well.
So my trip to Japan and back did not only give me an experience for a lifetime of being there. It gave me the experience of riding business class flights for free.
Sayonara Japan.
Posted by maarofkassim at 20:14