"This is the only English I know". 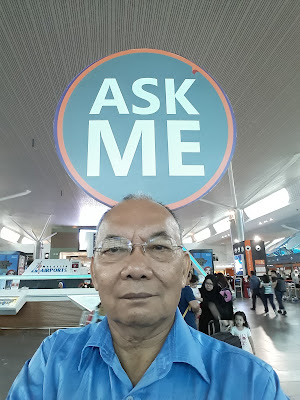 I am delighted that Tun Dr. Mahathir, our 7th Prime Minister had been giving most, if not all, of his press statements in the English Language.  The reason is understandable because he was facing both the local and international presses.

From what I saw in the local media a few people were not happy seeing Tun Dr. Mahathir talking in English. But imagine him giving statements in our National Language which is Malay. Then afterwards the international press would ask our local press for translations. What if the wrong translations were given?

I got sick watching our ministers and top government officials mixing Malay and English in sentences. To me, I'd rather see them talking Malay in full or English in full.

Earlier during my working days, I and my office mates talked in English most of the time. Then one by one of my mates retired and they were replaced with people who hardly talk English. To make matters worse my boss who was racist and hated English talking people would scold me if I talked a word of English to him.

I had no choice but to find people outside my office who could talk English. Maybe through this common thing, I discovered my best friend W as mentioned in my previous blog post.

I would try to talk in English to my non-Malay customers who had dealings with my office. I would only talk in Malay if I found that my customers understand my instructions better in that language.

There was a particular Chinese customer with a Christian name who I tried to talk to in English. But he kept replying in Malay. One day when I met him at his office his mobile phone rang. To my surprise, he answered the phone in English, although his grammar was not perfect.

When he finished talking I asked "You can speak English. Why can't you speak English to me?". He replied, "Because your English is high class".  My reply to his reply was simply "This is the only English I know".

I never consider my English to be high class. But I try not to make mistakes every time I talk or write in that language. I always corrected my friends if they talk English wrongly. For this, my best friend W really appreciated.

He would call me for advice on how to reply to phone messages. If he was invited to an event and could not make it he would ask me for the right words in reply.

As I see it, the present standard of English among Malaysians is deteriorating. Maybe this is due to our education system. The recent general elections witnessed the change of government at the Federal level. With it, I hope there is a change in our education system. In the end, I hope nobody will complain if the Prime Minister gives press conferences in English or Malay.
Posted by maarofkassim at 13:34

Respect you for speaking English correctly.