WHEN CRICKET WAS PLAYED HERE 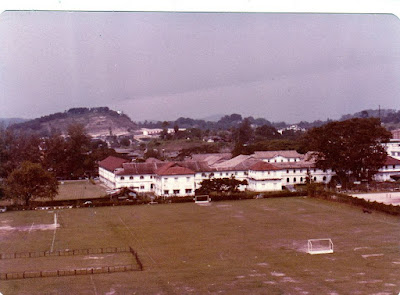 I took the picture from my office to show the Convent school which was later demolished to make way for a mega shopping mall that never materialised. The field is the Padang NS or NS Padang whichever way you call it.  You can see the hockey pitch to the right and part of the football pitch to the left (the white thing is a goal post). Hockey is no more played here since Seremban now has a proper hockey Stadium at Seremban 2. Football is still occasionally played. The white patch at the right of the picture was part of a tennis court beside the NS Club building (see below). The fenced area in the field was the cricket pitch which is a part of my story. 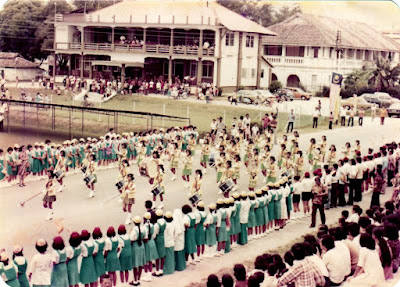 The building in the front was the NS Club which was later demolished to make way for the present DEWAN BANDARAYA SEREMBAN. From this building, the club members can enjoy the happenings on the Padang NS including cricket matches. The building behind was the primary St. Paul Institution (SPI) which was demolished to make way for the YAYASAN NEGERI SEMBILAN building.
My story started when I subscribed to Astro's wrestling channel. But the channel comes in a package which includes rugby and cricket. I like rugby but since cricket is there too I tried to understand what the game is all about. Nowadays it is easy to learn about the laws of any game by just surfing the internet. Reading about the laws of cricket taught me about another meaning of the word 'over'.
Watching cricket on television nowadays brought my memories back to more than 40 years ago when it was played right in front of my eyes. To be more accurate the game was played in front of my office.

I worked at Majlis Bandaran Seremban facing a big field called the Padang NS or NS Padang, whichever way you call it. Nobody calls it Padang Negeri Sembilan. The field was big enough to play cricket. I could watch the cricket games in the comfort of our air-conditioned office building but since the game was not on my liking list, I did not.
But my Indian and Ceylonese colleagues had a good time watching the games. In other words, they played truant and only went to their desks when there were phone calls for them. One reason why they dared to do so was both the President and Secretary of the Negeri Sembilan Cricket Association or NSCA were our bosses and they were watching the games as well.
Another group of people was also watching the cricket games in comfort. They were members of the NS Club which building was situated adjacent to our office building. In fact, my cricket-loving colleagues and bosses who happened to be members of the same club continued watching the games at the club when our office closed for the day.
Sometimes the then Yang Di Pertuan Besar of Negeri who happened to be a cricket fan was invited to watch the games and where else was His Majesty seated if not at the NS Club. One day His Majesty even came to see one of his princes playing. He was batting then and I watched him playing until he was bowled out.

During the games, every time a batsman was bowled out my cricket-loving friends would shout "He's out". They were also shouts of "Wicket", "Four" and "Six" which I only know their significance now.
Although I was a fan of the game, one day I was involved in it. My boss, a Ceylonese who happened to be the President of NSCA then wanted my assistance in ferrying three young Australian cricketers from the Seremban Railway station to their hotel in town.
My boss was beside me in my car. Before that, my boss never spoke a word of Malay to me. Being proficient in English, I did not mind. But on that day with three foreigners in my car, my boss spoke not a word of English. He spoke in Malay, although not of a textbook standard. I laugh every time I remember that moment even to this day.

Those were the days when cricket was played right in front of my office. Football and Hockey were also played at the NS Padang. Hockey had since then shifted to the hockey stadium at Seremban 2 but football is still being played on the field.
So what happened to cricket? It became a victim of progress. First the Majlis Bandaran Seremban was promoted to Majlis Perbandaran Seremban in 1979. The old Town Hall situated at the other end of the town was considered unsuitable and flood-prone. So the authorities decided that the town needed a new hall. Fo that they not only took the plot of land which housed the NS Club but a chunk of the NS Padang as well. On them, they built the present DEWAN BANDARAYA SEREMBAN.
So what is left of the NS Padang is not big enough to house cricket games. The NS Club was demolished and the members were given a piece of land at Rahang Square adjacent to the Negeri Sembilan Football Association building. Construction of their new building stopped without me knowing why.
The Negeri Sembilan Cricket Association still exists but I don't know what is their current situation.
Thank you.
Posted by maarofkassim at 13:15

I left COHIJ...The Sister School to SPI( oppozite to SPI ) in1967 in pursuit of a Nursing Career .I had heard of cricket but did it know it well like hockey, netball and sepak raga.. . My life meandering took a different turn ....I never return to M'sia to live except for visits...
I married an engineer from The Bahamas and migrated there. Becoming a. Citizen. It was as a post graduate Administration student at UWI. Mona Campus Jamaica...I heard about cricket again... .The multi diaspora of young Caribbean students at UWI were hooked on the cricket despite the fact I was under the impression it was adopted there from Asian continent. Vivien Richard's name came popping up and the cricket fever was quite intense as the Caribbean game...I returned home to The Bahamas...and found the game was played by expatriates here in The Bahamas Now after almost 50 years as a resident of The Caribbean I watch it more when it comes on. And I learnt about also about a love story of a fashion designer associated with cricket...which sparked an I teresti.
One day I will go and watch it properly. 😃😁😃