Two days ago I received a request from somebody to befriend me in the social network Facebook.  It was from a second cousin of mine from whom I did not hear for quite some time, more than five years I think. We call him Uda.

Uda is the short version of  'muda' which means young. In Negeri Sembilan the title is normally given to any one brother or sister from the fourth sibling onwards but never for the first, second or third. It is not the same in the state of Melaka as I see it among my wife's family. My wife's sister, a third sibling, is called Mak Uda by her nephews and nieces. In Negeri Sembilan, she would be called Mak Lang.

When Uda alerted me with his friendship request my memory went back many many years ago towards another person also called Uda. 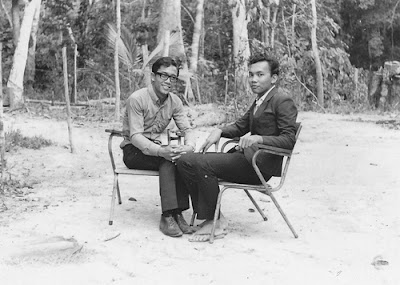 Me with the late Uda. He was wearing my specs and I was wearing his coat. This photo was taken in 1969.

After finishing my studies in a fully residential school I returned to my kampung while looking for a job. Somehow I became close friends with Uda much to the objections from my family members except my mother. They thought Uda was not fit to become my friend because of his low education. Uda's father died when he was still in primary school. After many years being a widow Uda's mother remarried. So Uda stayed with his mother and step father while his other siblings were with their own families.

Being the youngest in the family Uda was a spoilt child. Maybe this was another reason why my family members disapproved our friendship, me being spoilt by another spoilt person. Until today I am still puzzled as to why I had been close to him. Maybe after years staying in a fully residential school I needed the constant company of friends like before.

I left the kampung when I got a job. But I still befriended Uda when I came back during the weekends though the friendship was not as close as before. It was during one of these weekends that  I received shocking news about Uda. He was getting married to a relative of his step father who himself arranged the marriage.

Uda was only a few months younger than me and when he got married he was twenty years old. I sensed that Uda was going to face problems. Being very close to him I understood him very well. He welcomed my friendship as a way of getting away from being petted by his mother and family. Deep in my heart  I knew that Uda was not ready to become a husband or a father.

But there was nothing that I could do to prevent Uda from getting married at such a young age. Nevertheless Uda asked me to become his best man during his wedding. My mother did not object, yet none of my family members attended my best friend's wedding. I remember seeing some of Uda's sisters and nieces crying when Uda stepped down from his mother's house to go to his bride's house for his marriage. Was that some omen? Deep inside I was crying too.

My predictions proved unfortunately true. After marriage Uda went to stay with his in-laws about twenty kilometers away from our kampung. Uda started having problems with his in-laws when his wife was pregnant with their only child. Uda had no choice except  to be separated with his wife even though they loved each other. Their marital bliss was only for a few months and eventually they divorced, although I am not sure whether the divorce came after the birth of their child, a son. To prove their love neither of them remarried after that.

Uda returned to his mother's house in our kampung devastated. Not long afterwards, his step father left his mother, rather disappointed that his marriage arrangement between Uda and his relative ended in a bitter note.

Uda's life turned for the better briefly after that. He was drafted into the army. But he did not finish his training in the army training camp in Port Dickson. There were stories that he was abused physically and psychologically there. Again he returned to our kampung a changed man. This time the change was for the worse. He was suffering from mental problems. There was a story that he sent his ex-wife a photograph of himself in army uniform. This irked his ex-wife's family that they charmed him through the photograph. I didn't believe the story, though.

Due to Uda's mental problems I did not invite him for my own wedding. So I could not fulfill my reciprocal promise to Uda that he would become my best man when I eventually got married.

Uda's problems did not end there. Not long after he returned from his aborted army training, his mother died. From then on Uda lived an aimless life made worst by his mental condition. He stayed with whoever relative who was willing to offer him shelter and food. When he passed by my mother's house he would always ask for me as to how I was doing and all that. My mother would invite him in, offered him food and sometimes asked him to take a bath. Our neighbours were shocked that my mother was willing to invite this 'Uda Gila' as he was called then, in. But to her Uda was just like her own son.

Allah loves Uda. His suffering ended as he passed away when he was only in his forties. My mother only told me about his death months later. She knew that there was nothing I could do to help Uda. Until now I still believe that Uda's life became tragic the moment he agreed to get married at a very young age.

A few years ago when Uda was still alive my department had a joint enforcement operation with the police. Suddenly a police officer greeted me and introduced himself as Uda's brother in law (Uda's ex wife's brother). He remembered me because after his marriage Uda once invited me to his in-law's house and I stayed overnight. This police officer was still a young kid then.  I found out later that he married a cousin of my sister in law (my late brother's wife).


Still a few years ago my mother called for an ambulance to bring my sick step father to hospital. In the ambulance the Medical Assistant said his late father was from my mother's kampung. When asked further by my mother, he said he is Uda's son. Even though he never knew his father his upbringing was taken care of by his mother's family.

Alfatihah to Uda. May Allah bless his soul.

In deed a person mental can become worse due to the attitudue and treatment given by people around a 'metally sick' person.