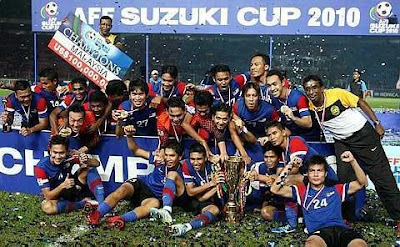 I am glad that I spent my younger days in the 60s, 70s and 80s. Those were the days of The Beatles, the Vietnam War, Hippies, men landing on the moon, Muhammad Ali (who called himself The Greatest), P. Ramlee and to a certain extend the golden years of Malaysian Football.
Since the end of the Soh Chin Aun-Mokhtar Dahari-Arumugam-Santokh Singh era I had not followed Malaysian football. Once in a while names like Azman Adnan and Akma Rizal propped up but they were soon forgotten, at least by me.
The 70s and early 80s were the peak of Malaysian Football. We qualified for the Olympics twice and won the bronze medal in the Asian Games once. Winning the gold medal in the SEA Games was just a formality. Those were achieved by our footballers who were amateurs. In other words they did not play football for a living.
Likewise reception by our citizens were at par with the rise of our national football standards. Fans flocked to our stadiums whenever our team were playing. When games were telecast live on television there were less traffic jams on the streets.
The funny thing was Malaysian football plummeted down when our players started playing football for a living. It started with the semi-pro thing and continued when they were full professionals. This was in stark contrast to teams like Korea and Japan which improved tremendously once their players turned professionals. Before, our national team were at par or better than the two mentioned national teams. But until now we can consider ourselves lucky if we beat Thailand or Singapore.
Interest among the public towards our national team dropped too. It was a rare occasion to see a stadium half filled when our national team was playing. There were more fans watching the state teams playing compared to the national team. I myself did not bother to watch them playing on television.
So it was a relief that our national football team won the Asean Football Federation (AFF) Suzuki Cup two days ago. We beat Indonesia 4-2 in aggregate, after winning 3-0 at home and losing 2-1 away. It was fitting too, since Malaysia also won the gold medal in the football competition of the last SEA Games held only last year. At last there is hope in our national football after being in the doldrums for more than two decades. Suddenly Safee Sali and Khairul Fahmi Che Mat are becoming household names like Mokhtar Dahari and Arumugam more than twenty years ago. By the way does not Safee Sali look a bit like the late Mokhtar Dahari?
But we should not be overwhelmed by this victory. Our record in reaching the semi-finals were not impressive. In the final group game we had to depend on others to reach the next stage. It was Indonesia that gave us a favour by beating Thailand. It is ironic than in the final games we did not return Indonesia's favour.
I just hope that this victory is not just a flash in the pan. Remember Denmark in the Euro 1992 competition. They did not qualify for the final stages held in Sweden and had to replace the qualified Yugoslavia at the last moment. But the totally unprepared Denmark team won the tournament. The same can be said about Greece during Euro 2004.
Still this is an achievement for Malaysian football. We won the AFF Suzuki Cup with players barely assembled since a few regulars were injured. Our players were born and bred in our own country and not naturalised with names like Gonzales and Bennet. Our coach is a citizen of our own country and not a mercenary.
With that I say "Congratulations, Malaysia."
Posted by maarofkassim at 09:35

Hmm iit appears like үour website ate my first comment
(it was extremely long) so Ӏ gurss I'll just sum it up what I wrote and say, I'm thoroughly enjoying yor bloɡ.
I too amm ɑn aspiring blog blogger but I'm stіll neew to the whole
thing. Do you have any tipѕ and hints for rookiie blog writers?

I'd definitely appreiate it.