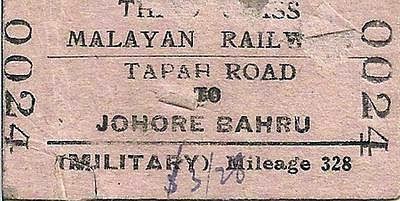 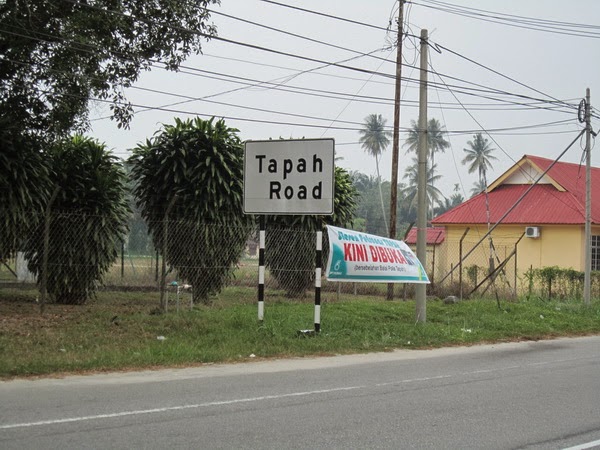 I asked my wife why the town is called Tapah Road? She answered quite correctly because it is situated on the road going to Tapah. Then I asked why not call it Jalan Tapah? She answered it sounds funny and said no town in Malaysia is called Jalan something. She even suggested that the authorities change the town's name.

So I explained to her what I know about Tapah Road. (For dear readers' information I am always fond of Perak having spend my secondary school years there). Since the north-south Malayan Railway (now KTM) railway line could not pass through Tapah, our British colonists built a railway station at this place which is about nine kilometers from Tapah and called it Tapah Road.

Tapah Road is in fact the second oldest Railway station in the country. If fact there was a branch of the railway line to Teluk Intan from Tapah Road. But this eventually closed just like the closure of the Taping - Port Weld and most recently the Seremban - Port Dickson lines. I remember going to Lumut in the 1980s and I took a wrong turn at Teluk Intan, I had to ride on a structure which was actually a railway bridge. This must be part of the closed Tapah  Road - Teluk Intan railway line.

Both Tapah Road and Kuala Kubu Road were involved in the double-tracking and electrification of the KTM lines, with different fates. Tapah Road Station was improved with longer platforms and even the new ETS trains plying the Kuala Lumpur - Ipoh route stop there. But Kuala Kubu Road was demolished and a new station called simply Kuala Kubu Baharu was built a few kilometers south. It got no 'Road' this time and only the KTM Komuter trains stop at Kuala Kubu Baharu.

So Tapah Road is the only place in Malaysia with the word 'Road' officially attached to its name, with apologies to Chow Kit Road.

Email ThisBlogThis!Share to TwitterShare to FacebookShare to Pinterest
Labels: Travel