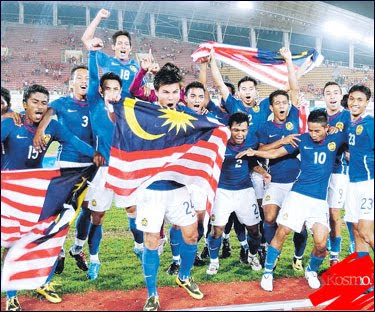 I don't want to be left behind in congratulating the Malaysia football team ini winning the gold medal at the 25th SEA Games in Laos. I only watched the game live on TV for the first half. Then I had to go to my surau to perform my Maghrib and Isya' prayers. I received the results through my moblile phone's SMS in between the prayers sent by a friend.

But we Malaysians cannot be too happy about the result. Please remember that for the SEA Games the football competition is among players who are under 23 years of age. So the gold medal was not won by the full Malaysian team although the under 23 players form the bulk of the senior team.

Still I am impressed by the progress made the team from the start. After being beaten 3-1 by Vietnam (the team we eventually beat 1-0 in the final game) in the group stage all seemed lost to Malaysia. But we managed to beat Thailand 2-1 to qualify for the semi-finals. When the Thai coach Steve Darby who once coached our Perak state team was asked to comment he simply said "What can I say? Malaysia Boleh!".

Then we met the other group winners Laos in the semi-finals. In front of their vocal home crowd we managed to beat them 3-1. Our young boys must be having guts of steel to do this.

In the finals we met Vietnam who as we all know had beaten us in the group game. The stadium as I saw it on TV was all red from the colours of the Vietnam supporters' shirts. Don't forget Laos and Vietnam are neighbours. I am sure too any Laotian in the stadium would be supporting Vietnam.

But we managed to beat the Vietnamese. Forget that the goal was an own goal. A goal is a goal no matter how it is scored.

My only hope is that this win will bring greater success for Malaysian football which had been in the doldrums for a very long time. Thirty years or so ago we could beat Japan and South Korea easily, but just look at where they are now. Even China with more than a billion in population was at par with us.

Looking at the Malaysian football or even the state teams I notice something missing. I am talking about the Chinese Malaysian players. I hardly see any of them. If I am not mistaken there was not a single Chinese player in the recent Malaysia Cup final between Kelantan and Negeri Sembilan.

We had great Chinese players many many years ago in the form of Soh Chin Aun, Wong Choon Wah and Chow Chee Keong. I enjoyed watching them displaying their skills. Something should be done to attract more Chinese players to play football for our state teams and eventually for the national team.
Posted by maarofkassim at 08:44