How fortunate we are. 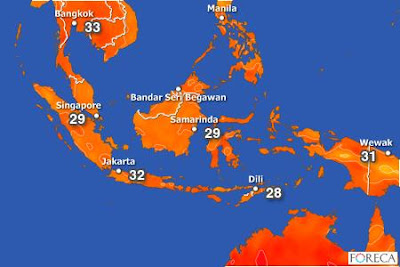 Last night I had the oppotunity to attend a function where our former Prime Minister Tun Dr. Mahathir was the guest of honour. Of course, any function attended by Tun Dr. Mahathir would not be complete without him being given the opportunity to make a speech.

I don't want to give details as to everything Tun mentioned, but there is one matter which I seemed not to realise all the while. Tun mentioned that our country Malaysia is fortunate to be situated in a protected enclave.
We are surrounded by Indonesia at the west and south, The Phillipines at north-east and Indochina at north. So, most of the country are protected by the earth's elements like typhoons, tsunamis and the like.
I remember four years ago landing at Kansai Airport, Japan on my way for a training course at Kitakyushu and Fukuoka. We landed in the rain. There I was welcomed by officers of JICA or Japan International Cooperation Agency, my hosts. One of the officers told me my flight to Fukuoka might not materialise because according to weather forecasts the city might be hit by a typhoon.
I was shocked for a while. I learned about typhoons in school, read about them in the papers and watched them on TV. But I never thought of being near one.

One of the officers, a Japanese, of course said "Insya Allah (yes, he said it) you will make it to Fukuoka". Maybe the mention of Allah changed everything. After a few hours wait the officers said everything is fine in Fukuoka and my plane is waiting. I landed safely at Fukuoka also in the rain.
During the journey from Fukuoka to Kitakyushu I saw the trees on torn he hills were swaying from the heavy winds. The rain was not heavy like the one in Malaysia but the winds must be moving fast although I never felt the effects as I was travelling in an air-conditioned van provided by the hosts.
Back to Tun Dr. Mahathir's speech, we must by grateful for being born in a safe place like Malaysia. Anybody who says our country is a failed or almost failed nation must be mad. Worst still, if he or she is Malaysian.
Posted by maarofkassim at 16:40

I totally agree with you. who ever says Malaysia ia a failed country, he/she must be mad. Or probably he/she must be a frustrated person. We can ask our fellow Malaysian who are now residing in overseas such as London, Melbourne, Perth, Boston or else where.