Sometimes you do not get what you expect. 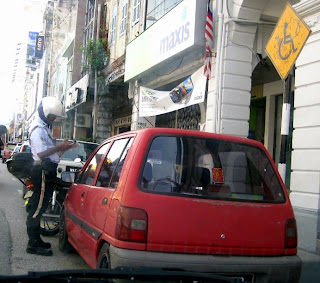 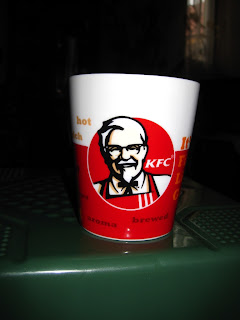 This morning one of my friends called me for breakfast. After he hopped into my maroon Kancil which this friend used to refer as  'king of the road' he asked me to send him to his bank first. Since there was no parking space available I double parked while waiting in the driver's seat while my friend did his transactions in the bank.
Suddenly a traffic policeman passed by me and parked his moped motorcycle between two already parked cars. I was expecting the worse, but was just hoping that he would ask me to drive on, which I would oblige. But instead he went to the parked car just adjacent and in front to mine and peeped inside. Only then did I realise that that the car, a red Kancil was parked on a bay meant for the invalid. The owner or driver was nowhere to be seen.
I thought the policeman peeped inside to look for any signs that the driver was really invalid. After being satisfied that he was not he issued a summons and pasted it onto the car's windscreen. I took the above photograph without the policeman realising it.
After that I still expected the policeman to come to me. But no, he went to his motorcycle and rode on. After a few minutes my friend came out of the car and asked me to drive to a KFC restaurant which serves breakfast.
During ordering I saw an advertisement hanging above my head about a mug as shown in the above photograph. The advertisement is in English and from what I understood the mug is given free together with any breakfast set. But with other or non-breakfast set you have to add RM 5.50.
So I simply asked the waiter, a boy, for my mugs. The boy said no and added I have to pay extra for it. So I replied from what I understood I only have to pay extra if I order anything other than a breakfast set. Then the manager who was passing by asked me what's the problem.
I told him the same thing I said to the boy. He too replied just like what his boy said. Then I asked him how much do I have to pay for the mug during breakfast. He replied "RM 5.00". Then I told him "There is no RM 5.00 written, only RM 5.50 for any non-breakfast order."
Then he replied "Do you see anything written FREE there?" which almost blew my top. So I replied, "Yes, I do not see the word FREE, but I also do not see the figure RM 5.00 as you said. I see only one figure that is RM 5.50 and is clearly written as the price of the mug if you buy it with anything other than a breakfast order. So I assume with any breakfast order the mug is free."
So he asked "Do you really want the mug?" to which I replied "I only want what is rightful for me." So he took the advertisement down and said this is a mistake done by KFC's  marketing department, not his. My regret is I forgot to take a photograph of the sign. It will make a good argument if I send it to 'Mind Our English' of the Star.
By the way our bill was only RM 9.50 for two breakfast sets paid by my friend. In return we took home two mugs free.
Posted by maarofkassim at 18:47