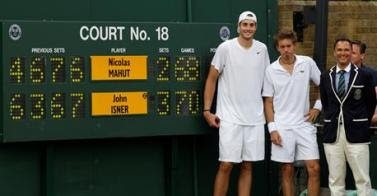 When everybody is talking about the FIFA World Cup in South Africa very few realise that there is another tournament going on. It is the on going Wimbledon Tennis Tournament in London, United Kingdom.
The talk there now is not about who will win the tournament. Is is about the longest match ever played. The match was the first round gentlemen's single match between John Isner of the USA and Nicolas Mahut of France.
The game lasted for 11 hours and 5 minutes. It stretched for three days. A few world records had been made. Why? Because the fifth and last set had 138 games instead of the usual 6 to 12 games. This is because in Grand Slam tournaments there are no tie-breaks in the ladies third and the men's fifth sets. Luckily tennis matches allow for stoppages in situations like bad weather and failing lights.
In the end American Isner beat French Mahut. What a coincidence to the other tournament in South Africa. There the USA qualifies to the next round top of their group, while France finished last in their group. But surely Nicholas Mahut feels no disgrace at all. Maybe all Frenchmen will now consider him a hero and forget South Africa.

Maybe too this tennis match by their fellow countryman will make a good  inspiration for the American footballers. Who knows they will produce 'The Longest Football Match'. After all the second stage of the World Cup is the knockout stage. Extra time and penalty shootouts are to be expected.
Last night I switched from watching the Italy - Slovakia match for a while to watch the Isner - Mahut tennis match. I knew I was watching history being made. The players were treated like finalists with standing ovations and all. Many spectators wanting to enter the court were locked out. Like me they also wanted to watch history being made.

It was a relief for every body when Isner scored a break point winner in the last and 138th game of the set. After the game the players were presented with souvenirs just like finalists getting their trophies
I think abolishing the tie-break when a game reaches six games apiece in the fifth set of a Grand Slam tennis match is not a fair decision. John Isner will be too tired to face his second round opponent who would have a good rest by now. I prefer the tie break.

But at least for this year's tournament Wimbledon had something that people will talk for years. Otherwise people will be talking about the football World Cup.
Posted by maarofkassim at 15:03

Email ThisBlogThis!Share to TwitterShare to FacebookShare to Pinterest
Labels: Sports