A question of authority. 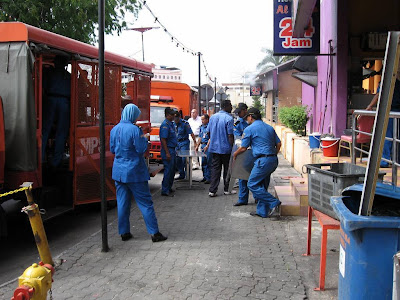 I read with interest the news about of a Pulau Pinang State Councillor who was criticised for giving orders to Pulau Pinang Municipal Council officers in clearing some obstructions and at the same time executing the actual enforcement himself. As a former Municipal Council officer myself I commend him for his concerns. The above picture shows enforcement officers of the Seremban Municipal Council carrying our own similar enforcement works. I was part of the team them but I was not in the photograph because I was the photographer. The man in white was my colleague who was in charge of this particular operation.
It irks me now and then seeing hawkers and restaurant operators putting their utensils in public places like five foot ways and parking bays. Many people do not understand that public places should be left free of obstructions. Local government laws that require developers to provide public space or places when they develop buildings. These public places belong to nobody. They are provided for the convenience of the public to walk, run or play. They are not meant for food stall or restaurant operators to put chairs and tables on.
Yet it irks me further when there are members of the public who defend the illegal actions of these operators when they should be thanking the authorities. Yes, there are members of the public who find it comfortable to sit on chairs put up in the open air. But they forget that there are also members of the public who enjoy walking or running in the open air and these chairs and tables are obstructing their right of way.
But of course there are rules to follow when it comes to enforcing the laws pertaining to obstruction of public places. For that matter there are rules to follow in any form of enforcement. In the local authorities we have appointed Councillors who are mostly politicians. From my experience many of the councillors were ignorant of their duties. Some think they were law enforcers like us. Some shouted during meetings "Why don't you do that, why don't you do this?. Why don't you demolish so and so's stall?" and so on.
So in one meeting our President suggested that the Councillors follow us during our enforcement works. So a time table was drafted for their convenience. At first their attendance was encouraging, but it dwindled soon afterwards. In fact there were arguments among themselves when some Councillor suggested we do a few things while another opposed them. Some Councillors suggested that we raid a particular joint while another protested for the simple reason that he was a regular patron of that joint. Councillors or not, they are human too, with their own vices. In the end they all gave up and we continued our enforcements without worrying about somebody looking over our shoulders.
Fortunately our Councillors understood their limitations. None of them gave particular orders to us during our enforcement operations and none of them touched anything belonging to the offenders. The police too were invited during some of our operations primarily to protect us and secondarily to foresee that the offenders did not commit any criminal acts. There was one incident when the police had to handcuff an offender who was turning violent towards me, of all people.
So it was wrong for the Pulau Pinang State Councillor in giving orders to the local authority officers and at the same time helping them in performing their duties as I saw them on television. The officers are authorised and trained in executing their duties while State Councillors are not. This State Councillor might have good intentions in giving the public their rights of unobstructed paths along public places. But let the right people do the right things.
This reminds me an incident during the last General Elections. I was a Presiding Officer authorised by the Elections Commission or SPR in one of the Polling Stations. After the votes were cast and the ballot box opened one of the candidates' agents picked up a few ballot papers and began counting them. I told her straight away to put down the ballot papers. She replied that she was just trying to help me and my fellow elections officers. She got the guts to say that she had done this before in past elections. I told her that we are authorised to handle the ballot papers while she was not. If she continued to 'help' me the election result for this particular constituency could be declared null and void.

Likewise she might have good intentions but she simply had no authority to exercise them.
Posted by maarofkassim at 11:10