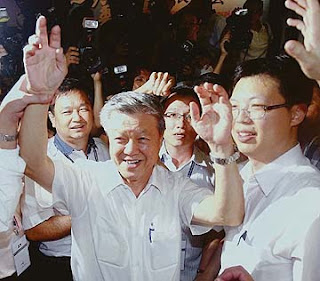 Although I don't dig politics I always admire the MCA or Malaysian Chinese Association, a political party. Being a retired employee of a local authority I had to work with politicians, whether I liked it or not.
The politicians came in the form of our Councillors or Ahli Majlis. Since local government elections had been scrapped the local authority councillors are now appointed instead of being elected. If I was made to understand, one of the reasons for the local government elections scrapping was the mess made by the elected councillors of the then Seremban Town Council or Majlis Bandaran Seremban. But that was before I joined them in 1973.
So the political parties that control the state nominate the Councillors' names to the State Authority at the appropriate times. Once approved they are Councillors, be it for a City Council, a Municipal Council or a District Council.
In the case of the Seremban Municipal Council I had noticed that the MCA had always nominated their young men and women as Councillors. Some of these young men and women were always groomed to later contest in the national General Elections either to become State Assemblymen or Members of Parliament. It is a promotion of sorts.
There were a few former Seremban Municipal Councillors from the MCA who had passed these promotion stages. One had gone to become a Deputy Minister.
This is unlike the other component political parties in the state. Some of their Councillors were former State Assemblymen. We even had a former Senator who was appointed Councillor. So being appointed local authority Councillors is a demotion of sorts for them.
During meetings the MCA Councillors always questined us officers why certain actions were taken against certain individuals or parties. I considered this questionings as their real role representing the taxpayers. In other words they were defending the taxpayers who they represent.
This is unlike Councillors from the other political parties (and partners of the MCA) who always asked us why actions were not taken against similar individuals or parties. For me these Councillors do not know their roles. They think that they are enforcers instead of representatives. Unfortunately for us officers we were the one who had to do the dirty work for these impersonators.
Unfortunately too for the MCA Councillors they were always voted out in numbers during these meetings if they protested. Unfortunate for me too, because I always consider these MCA Councillors as men and women of respect and I always felt at ease working with them.
Alas the MCA fared badly in the last General Elections. I strongly believe one of the reasons for their poor showing is the dirty work done by us at the local authority level at the behest of their political partners who I referred as impersonators.
So we have a funny situation at least in the Seremban Municipal Council level. Our Councillors are from the coalition of parties that control the state. But the State Representatives for the most of the Council areas are from the opposition.
As the whole country knows now, the MCA now has a new leader in the form of Dr. Chua Soi Lek. I don't want to touch about his past. But the fact that the members choose him despite his setbacks, if any, only proves his quality.
I sincerely hope that Datuk Seri brings back the MCA glory.
Posted by maarofkassim at 12:15