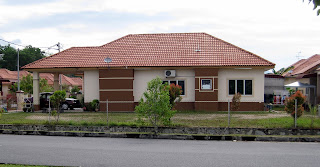 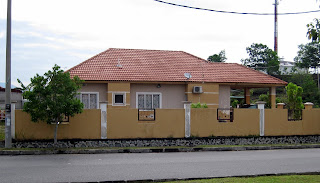 Look at the two houses above. They belong to my neighbours. The top house is surrounded by a fence while the bottom one by a wall.
Everybody has his own preferences. But in the above cases my two neighbours had no choice because the houses were built like that by the developers. Of course the one with the wall had to pay more.
But if I was given a choice I would prefer the house with fence. Beside being cheaper I could easily look at happenings outside. It is also an incentive to keep my house tidy. Who likes to look at an untidy house?
My house, being a semi-detached house just like the above two is built with a fence at the side and a wall in front. I told my wife there is no reason for me to change the side fence to a wall. But I have a slight problem. My neighbour's house is vacant since the owners are away. Every time I mow my lawn I have to mow my neighbours' too.
I find the wall in front as a burden. There is an open space in front of my house where boys play football in the afternoons. To watch the boys I have to go outside instead of watching them in the comfort of my home.
As a footnote the above house with the wall was burgled once. The burglars came during the day when the owners were away at work, climbed the wall and plied open one window. The wall played its part in concealing the burglars at work.
Posted by maarofkassim at 11:46

If you ask me, my answer is fence. As your have stated, the house with wall was burgled. Thieves can even enter the house in the day, because no body can see what is happening behind the wall.