Is there no other way? 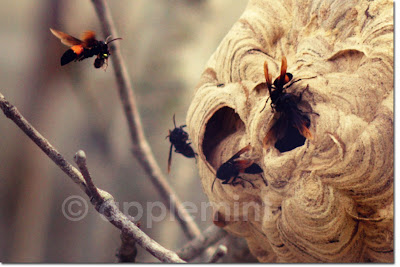 There was a hornet's nest about 200 meters from my house. I said 'was' because it is no more in existence now. The nest was hanging on a branch of a tabebuia tree. I passed by the tree and nest every time I went to the surau or town.
I know the dangers of being stung by a hornet. When I was small in my kampung I was stung by a hornet once while eating my langsat fruits. Somehow hornets like to feed on the juice of the langsat fruits discarded by humans. I got stung when I stepped barefooted on some discarded langsat fruits. I did not realise that there were some hornets feeding on the fruits.
When I saw the nest it never occured to me to perform a vendetta on them just because one of their members stung me many years ago. I thought if I don't disturb them they in turn will not disturb me. I thought of taking a photograph of their nest but postponed the idea because I wanted to use my DSLR and shoot from far. Who knows if I get too close using my digicam the hornets might think I wanted to disturb them.
I was just hoping that my neighbours were thinking like I was thinking. That the hornets will not disturb us if we do not disturb them. Unfortunately somebody had other ideas. When attending a Hari Raya open house the other day somebody mentioned about the nest and suggested that I contact my former department to do something. I just replied that my former department, a local authority, do not include the destruction of hornets' nests as one of their functions.
Yesterday when I passed by the tabebuia tree I saw some of its leaves had turned dark. I sensed something must had happened to the hornets' nest. My fear was confirmed when I saw what remained of the nest on the ground. The nest had been burned and surely most of the hornets, if not all had been killed by fire.
From my knowledge of insects I know that the nest was started by a couple of male and female hornets. They must had chosen the wrong tree to built their nest. What a pity the couple and their off springs had to pay a heavy price for being in the wrong place and the wrong time.
We seldom hear of people dying after being stung by hornets. But we do hear of people dying due to dengue fever which is transmitted by harmless looking aedes aegypti mosquitos. If only we fear the aedes mosquito like we fear the hornets there may not be many people suffering from dengue fever.
I wonder if there is any other way of getting rid of hornets without killing or burning them.
Posted by maarofkassim at 15:59

Aedes mosquitoes, they just carry and spread the virus. It is different with them hornet. They sting when angered. Do not make them angry. They will not turn to the green monster like the Hulk when they are angry, but they use their God gift weapon - their stings on the perpetrators disturbing them!

There is no other way the moment. May be one day we can use the pheromones to drive them away from human dwellings.