The day previous to this I was meeting old school friends at Melaka. This time I was meeting another set of school friends in the heart of Kuala Lumpur. In Melaka it was a breakfast meeting but in Kuala Lumpur it was a lunch one.
There is a particular reason behind this meeting. There was a contest among our old school boys' mailing group. The contest was to correctly guess the winner of this year's Formula 1 race. The losers would treat the winners at lunch at a particular restaurant in Kuala Lumpur.
I was not involved in the contest. But I was invited to join the lunch and treated by the losers after I told them of my interest in the Formula 1 race too.
Driving my car or riding my bike there is out of the question because the place is in the heart of the city centre.
At first I thought of going by train - the KTM Komuter from Seremban and Rapid KL from KL Central stopping at Masjid Jamek. After looking at the KL map I decided to ride the SKS-KL bus as the bus stops near the restaurant. 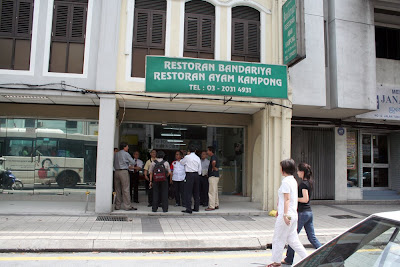 Here is the place, Restoran Bandariya at No. 8 Jalan Tun H S Lee, Kuala Lumpur. The photo was taken after the lunch. The boys looked as though they did not want to be separated. If I am not mistaken H S stands for Henry Sir.
The name Bandariya reminds me of another name, Pandaraya. Both words sound almost like Bandaraya or City. In this case the City is Kuala Lumpur.
Pandaraya was the name of a Kuala Lumpur based company doing anti mosquito fogging for a fee. The workers would knock on someone's door in KL and said "We are from Pandaraya. We are here on an anti-dengue campaign. We want to fog your house. Is it okay?".
The house owner thought upon hearing that the men or women were from Dewan Bandaraya Kuala Lumpur or the Kuala Lumpur City Hall, the city's local authority. He knew that he would incur the wrath of the local authority if he refused. So he let them fog his house.
After the fogging was finished the men would produce a bill for the services done. The house owner protested saying as far as ke knew Bandaraya normally fog houses free of charge.
Only then the workers showed him the company logo and name on the bill which clearly showed the word Pandaraya instead of Bandaraya.
What the company did was legal although not at all etical. However their ploy was short-lived because a few people who felt duped complained to the newspapers. I wonder whether the company exists now or maybe they have changed to another confusing name.
But I am sure the owner of the Bandariya restaurant does not use the name to confuse or dupe people.
What is special about this restaurant is they serve ayam kampung or village chicken which is fried. There is now at least one restaurant in Seremban trying to emulate this. But I have not tried their chicken.
Ayam kampung is different from normal chicken in that they have less fat because the chicken roam freely instead of normal chicken which are kept in cages. 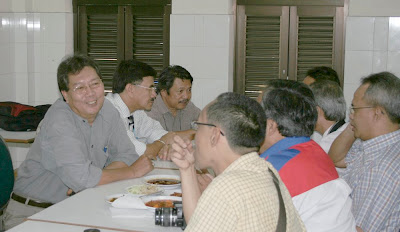 On the left banker Mohd. Nor Yahya (MNY). Next to him is Industry Expert Hamdan Haji Idris (HHI). MNY later drove DKN back to his Medical Centre at Bangi and me back to Seremban. 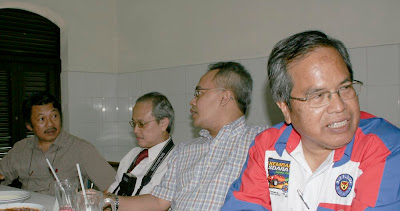 They were talking about anything except Formula 1. 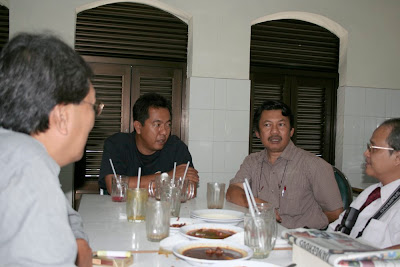 In the black shirt is Ghazali. 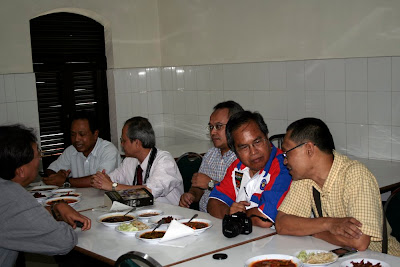 Syed Nazim to the right joined just before we started eating. 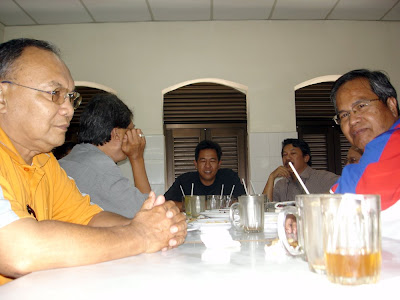 That's me on the left. I took this shot using my camera's self timer and mounting the camera on a mini tripod.
We parted company wishing there will more of this kind of meeting in the future. Banker Mohd. Nor who is ten years my junior later drove Dr. Khairun Nazar (DKN) back to his Medical Centre at Bangi. He then proceeded sending me back to Seremban.
It was my first ride in a BMW. The car's controls are all push buttons instead of mostly dials like in my Proton Waja. Another difference is you don't feel the automatic gear changes. At least I feet it when driving my Waja.
When Mohd. Nor started accelerating in the MRR2 I asked him whether his car is fitted with ABS. He replied that the ABS had saved his ass a few times. Only then that I realised that I was asking a stupid question. Surely a 2.5 cc 5 series BMW has got the ABS!
I consider Mohd. Nor's offer of driving me back to Seremban as a form of respect from a junior to a school senior.
Posted by maarofkassim at 21:25