Why change the wheel when you can patch the tube. 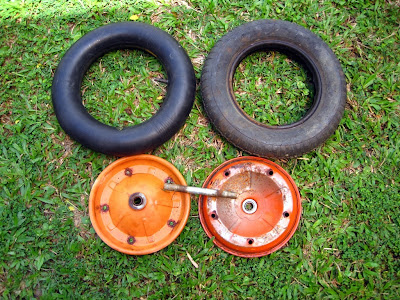 The single tyre of my wheelbarrow went completely flat about a week ago. It used to loose air but after receiving air from my bicycle pump it would become normal again. But not this time.
I knew that if I bring my wheelbarrow to any hardware shop they would replace the whole wheel. After all why do you see wheelbarrow wheels being sold in hardware shops? So I decided to either patch the tube or replace it.
I thought dismantling the wheel from wheelbarrow is an easy job by the look of it. But not this barrow, since the nuts had been rusty due to my own negligence. So I had to look for my available tools to free the wheel from the barrow. Before that I had to spray the rusty nuts with the thing called WD-40.
With the wheel free from its master I had to ply it open to separate the tube from the tyre. I found this job tougher than freeing the wheel from the barrow. Again WD-40 had to be used. After much sweat at last I got the tube out.
Using my scooter I went to my favourite bicycle shop to have the tube either patched or replaced. But on reaching there I was disappointed when told by the owner that he had no stock for wheelbarrow tubes. When I asked him to just patch the tube he replied he had stopped patching tubes. He just replaces them as they come. But he was good enough to suggest I try any car tyre shop for that piece of job.
So I brought my tiny wheelbarrow tyre tube to my favourite tyre shop. The owner, a lady laughed when I showed her the tube. She said nobody had come to her shop bringing just the wheelbarrow tube. Normally they would come with the wheelbarrow or just the wheel. Nevertheless she asked one of her workers to patch my tube.
After my patched tube was returned to me I asked her how much I had to pay. She just smiled and said "Don't mention it".
Posted by maarofkassim at 14:54