A tale of two suraus. 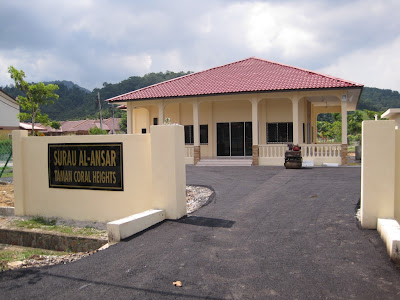 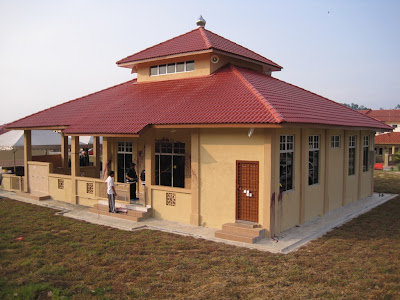 Their surau.
Today in almost every newspaper in the country we read about a surau in Seremban being splashed with red paint and thrown with empty liquor bottles. The reporters came late and by the time they came the bottles had been taken by the Police. I was fortunate to pass by that particular surau yesterday morning and I took some photographs. The bottles were beer bottles. I wrote a story about that incident in my previous post.
That splashed surau is only about 500 meters away from my surau. The surau is not 'mine' in the sense that it was not built with my money. But I use the word 'mine' anyway because that's where I perform my prayers nowadays.
When I performed my Haj pilgrimage almost three years ago I was challenged by my religious teacher or Ustaz stationed at my hotel. He said if we could walk to the Masjidil Haram in Makkah which is situated about 800 meters from our hotel to perform our prayers why don't we do the same thing at home. So when I returned home I disciplined myself to perform my prayers at my housing estate's surau.
The surau then was a temporary one. A few of my neighbours were brave enough to rent a double story link house and turned it to a surau. Of course this surau had its limitations. Not many people could use it at the same time. When occasionally we had functions like the Holy Prophet Muhammad's birthday we had to close the road in front of the surau to accommodate the extra patrons.

We knew that we could not rent the house forever. We had plans to built a proper surau. Fortunately our housing developer had reserved a plot of land for this purpose. An application was made to the State Government for them to give us a surau. Meanwhile we had Plan B. We appointed a few professional donation collectors to raise money for us. In case our application to the State Government being rejected we could still build the surau on our own. In the mean time we had regular prayers in the wish that our dreams would materialise.

Until the beginning of the year we received no positive news from the authorities. It was then decided that we were going to build the surau on our own. Suddenly out of nowhere we received news that the State Government had approved our application. Construction would start in April 2010 and the surau would be ready in two months.

Unknown to us the people in our neighbouring housing estate were also having similar plans of their own. Suddenly on 1st April 2010 they started the construction of their surau. We later learned that it was build according to their Plan B, meaning they were building on their own.

A few days later construction of our surau started. Suddenly two suraus about 500 meters apart were being build simultaneously. A few outsiders who were unfamiliar with the local geography were puzzled why two suraus of very close proximity to each other were being built at the same time. We had to explain the situation every time.

At the beginning it looked like their construction was faster than ours. On my part, since I was jobless I attended to the construction of our surau almost every day. But in the end, like the hare and tortoise race we beat them. We started using our new surau on 1st July 2010 while they only started using their surau 23 days later.

It is obvious just by looking at the above photographs their surau costs more than our surau. But the value of a religious institution like a surau is not based on the cost of construction. It is from the patronisation of it by the people. In this case I can proudly say our surau is patronised better than theirs.

As for the other surau somebody splashed it with red paint and thrown empty beer bottles in the early hours of yesterday. Who they were and for what purpose was not known by the time I wrote this post. About an hour ago I passed by the surau. The splashed surfaces had been cleaned. Undercoat paint had been applied to the affected masonry. People were digging holes around the perimeter to construct fences.
Posted by maarofkassim at 15:45