After a hectic Saturday I was back in Melaka on Sunday 26th October 2008. I was supposed to be with my wife's family to send my niece to her groom's house in Tanjung Keling, Melaka for his family's wedding reception there. What a coincidence because that morning my Melaka school mates were having their monthly get together at a restaurant just behind the Melaka State Masjid. Here I was with them. At extreme left is Wan Hashim from Kelantan. Like me he was in Melaka with something else to do. Next to him are Ezwan and Zairi of the Melaka Education Deparment. These two were at my brother-in-law's reception the day before because they happen to work in the same department with my brother-in-law. What a small world. Right in the middle is Haji Ismail Latif of Serkam. He was my room mate in my final schooling year. But we were in different classes. Next to him is Haji Ninggal Hashim of Serkam too. He was four years my senior. The last time I saw him was forty-five years ago. To my left is Muhammad Abdullah, one year my junior. He hailed from Batu Kikir, Jempol, Negeri Sembilan but not makes Melaka his home, having retired there. 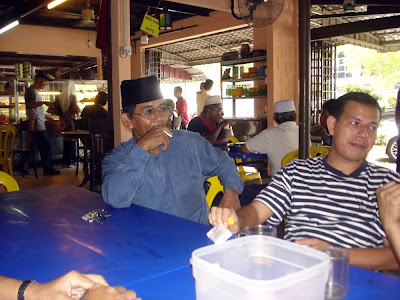 The man wearing the songkok is Abd. Rahman Meran, my junior. Must have started smoking in school. 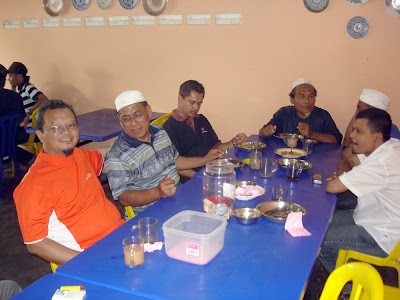 The man in orange is Haji Suffian Haji Yahya who runs a Tom Yam Restaurant in Melaka.


Other than Rahman Meran I forgot who is who here.


Forgot his name too. Never mind, he is a Sdarian. 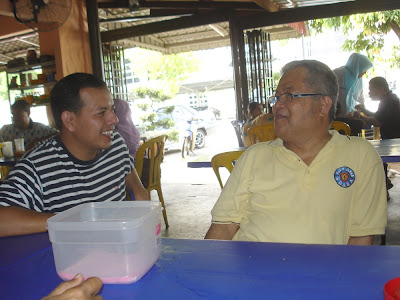 Wan Hashim and Anuar Yatim. Anuar is from Rembau, Negeri Sembilan but like Muhammad Abdullah makes Melaka his home.

During the session I was talking a lot to Muhammad Abdullah who is better known as Madolah. Madolah was my good friend at school. Before knowing me he already knew my elder brother Shamsudin who was staying at my uncle's house at Batu Kikir while schooling at Kuala Pilah. I told him that I now feel closer to my old friends than before. He replied that this is due much to the digital revolution. Now we can communicate easily with our mobile phones, with the SMS and all that. On top of that we can email each other using the computer. Some of us have blogs too.
I remember when I had a reunion with my classmates two years ago. One of my friends Ghani was fumbling with his digital camera. I asked him what's the problem. He honestly replied that the camera belonged to his son and he didn't how to use it. So I helped him in taking a few shots of him with our old friends.
Maybe I and Madolah belong to the few at our age who keep up with the digital age.
Posted by maarofkassim at 13:19