I had not driven far for so long, so why not take this opprtunity to go to the east coast. Almost a year ago I subscribed to a tour and travel management company. The package includes two vouchers to stay in any of the hotels listed by them. I was lucky to make an early booking as the Hotel I went to, the Grand Continental Kuantan normally is fully booked during the weekend.
I went with my wife, youngest kid and the only one still staying with us Anis and our eldest grandson Danial. We went through the shortest route possible from Seremban that is through Kuala Pilah, Bandar Baru Serting, Keratong and the Segamat Kuantan highway. The traffic was okay and I really enjoyed the drive.
At Kuantan we just relaxed at the hotel with me and Danial having occasional dips at the hotel's swimming pool. Danial was really enjoying himself although he still has his occasional sulks. We were joined at dinner by my daughter Ina, her husband Nazeem and son Haziq at Wan Tomyam Restaurant just opposite the hotel. The food was good and the restaurant is clean by my standards. Ina and family were staying at nearby Sri Malaysia as Nazeem was having a meeting there. They had a long journey from Kota Bharu, Kelantan. 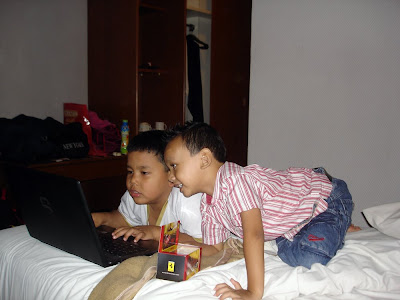 Danial and Haziq looking at my new Compaq laptop

The next day after a simple lunch thrown by Nazeem at a stall beside Sungai Kuantan we started our journey home. For a change we went through the East-Coast Highway until the Temerloh Interchange and from there we took the federal road to Negeri Sembilan. For a few kilometres from Temerloh we were running parallel to the massive Sungai Pahang. Traffic was heavier as compared to the route we had the day before. When we passed through Triang the road was quite bad. Then I remembered the State Assemblyman for this area is from the DAP, thus the neglect. When we reached Negeri Sembilan I could see the difference. Nevertheless the drive was enjoyable too.
We bought some fruits and 'gula enau' at a roadside stall in Juasseh. I and Salmah never forget to buy this particular 'gula enau' at this particular stall when we pass this area. The price had gone up gradually according to the times but that's life. The 'gula enau' producer whoever he is and the stall operator have to live accordingly. I mean when the prices of other necessities go up they increase the prices of the goods they sell too.
We reached Seremban just before Maghrib just in time for me to watch Aston Villa thrashed their neighbours Birmingham in the English Premier League. The game was overlapped by the Newcastle - Sunderland game where Newcastle won. It looks like my idol Kevin Keegan willl have a long managerial spell at Newcastle.
Bye.
Posted by maarofkassim at 10:19

Email ThisBlogThis!Share to TwitterShare to FacebookShare to Pinterest
Labels: Travel